The Arduino Uno rev 3 board

The Arduino Uno Rev 3 is a microcontroller board.

This is the reference Arduino version for prototyping, as lots and lots of tutorials use this version of Arduino as their reference board.

It comes with an 8-bit microcontroller, an ATmega328P, which comes with 32 KB of Flash memory, 2 KB of SRAM and 1 KB of EEPROM.

The Arduino runs at 16MHz at a voltage of 5V, and can be powered with a recommended input ranging from 7V to 12V.

In terms of I/O, the Arduino Uno has an USB-B port that can be used by a computer to transfer new programs to run, a power input and a set of I/O pins. It has 20 I/O pins, 14 digital and 6 analog pins that have 10 bits, mapping values from 0 to 1023. 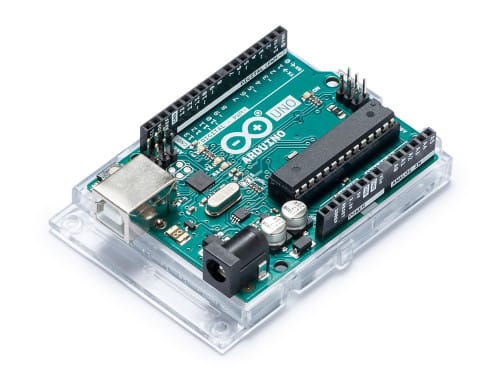 In the above picture, we can see at the top the 14 digital I/O pins, which can be configured to be output pins or input pins programmatically.

At the bottom, we have the power pins, and the 6 analog input pins.

There is a built-in led, linked to pin 13, that offers us status information.

The Arduino Uno comes with an USB port that allows you to connect it to the computer and load a program on it.

The Arduino has no operating system, and it runs one single program at a time.

Once a program is loaded, it is booted any time the Arduino is powered, either via USB or via the power port via a AC-to-DC power cable or a battery. This means that once you load the program, you can put the Arduino on a mountain with a solar panel and a battery, and it will keep running until there’s power.