The Arduino Uno WiFi rev 2 board 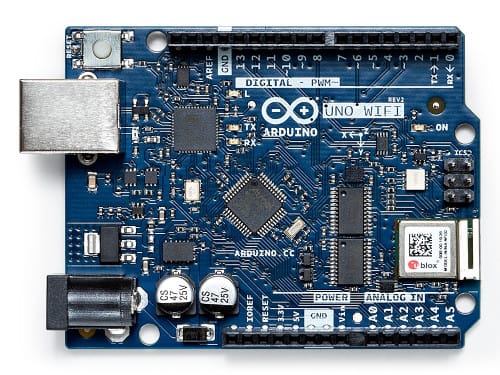 It has the same form factor and size of the Arduino 101, Arduino Zero, Arduino Yún, Arduino Leonardo, Arduino Uno and Arduino Ethernet.

It comes with an 8-bit microcontroller, an ATmega4809, which comes with 48 KB of Flash memory, 6 KB of SRAM and 256 bytes of EEPROM. This is a lot more memory than previous Arduino Uno rev 3 boards had with the ATmega328P. If you have an older Arduino Uno board laying around, be aware of this change.

The Arduino runs at 16MHz at a voltage of 5V, and can be powered with a recommended input ranging from 7V to 12V.

In terms of I/O, the Arduino Uno has an USB-B port that can be used by a computer to transfer new programs to run, a power input and a set of I/O pins. It has 20 I/O pins, 14 digital and 6 analog pins that have 10 bits, mapping values from 0 to 1023.

It features a WiFi module that supports 802.11b/g/n, the NINA-W13 which comes with an integrated TCP/IP protocol stack that can give access to a WiFi network, with hardware-based security.

Or, you can let the Arduino act as an access point, so you can connect to it.

Plus, it comes with an integrated IMU (Inertial Measurement Unit) which lets you do some very cool motion sensor applications, the LSM6DS. This module provides 3D accelerometer and 3D gyroscope.

The Arduino Uno comes with an USB port that allows you to connect it to the computer and load a program on it.

The Arduino has no operating system, and it runs one single program at a time.

Once a program is loaded, it is booted any time the Arduino is powered, either via USB or via the power port via a AC-to-DC power cable or a battery. This means that once you load the program, you can put the Arduino on a mountain with a solar panel and a battery, and it will keep running until there’s power.