Arduino Create is a cloud editor that lets you write and compile code directly in your browser. 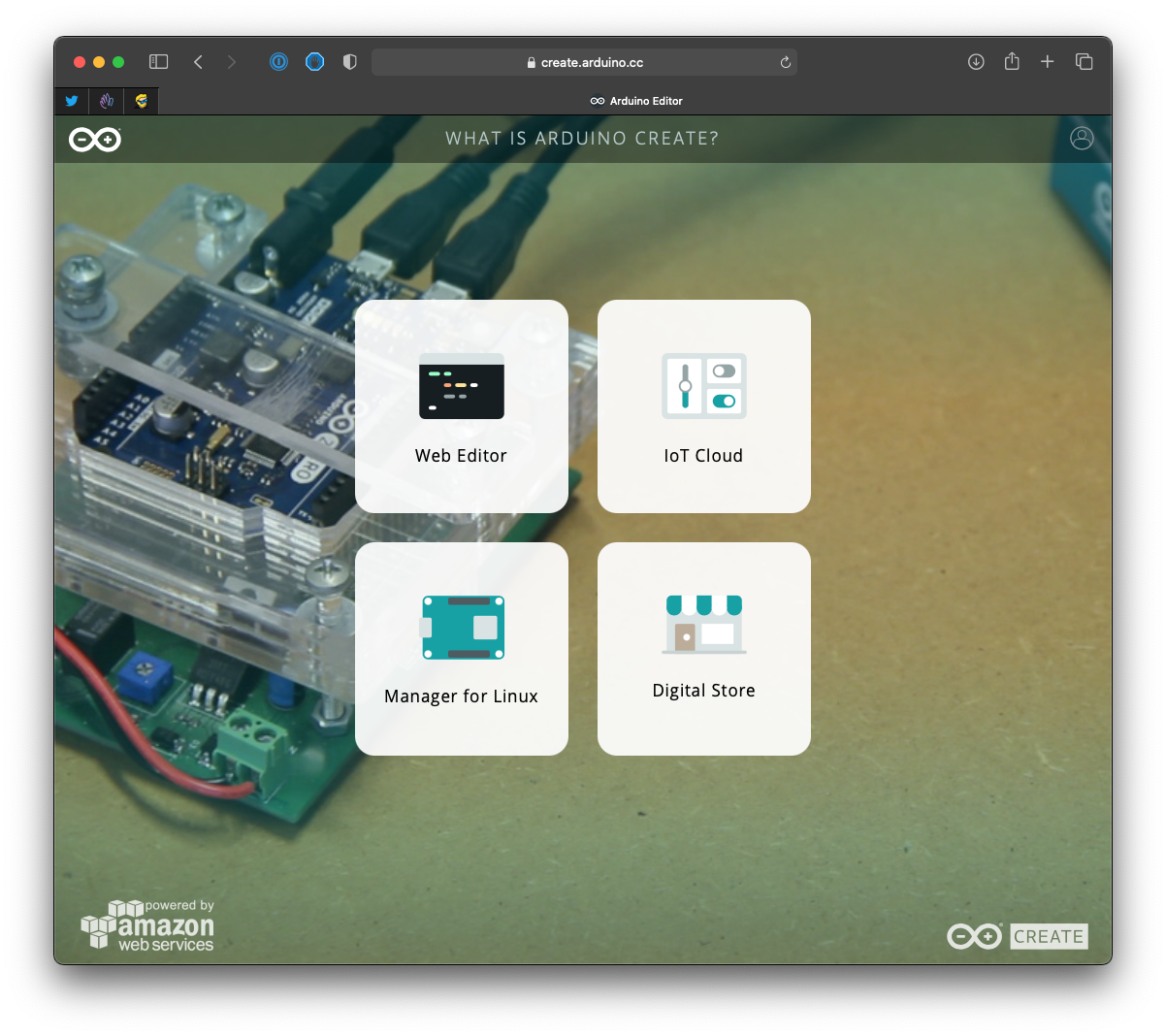 In this post I want to explore the Web Editor.

Using it, you don’t have to install anything on your computer to create your Arduino programs, except a plugin to let it “see” the board connected to the computer, but other than that everything automatically updates and there’s zero setup, which is optimal to get up to speed quickly with Arduino.

It’s free, with a generous free tier, and being a cloud tool it provides automatic backups and cross-device usage and it works on Windows, Mac and Linux.

It also lets you share programs on Project Hub https://create.arduino.cc/projecthub, the place where you can share your projects (and see what other people create!).

After you sign up, you are asked to install the plugin I mentioned, and once you run it, you’re already set up.

Head over to https://create.arduino.cc/editor, then you will immediately see a new sketch, the name Arduino gives to programs: 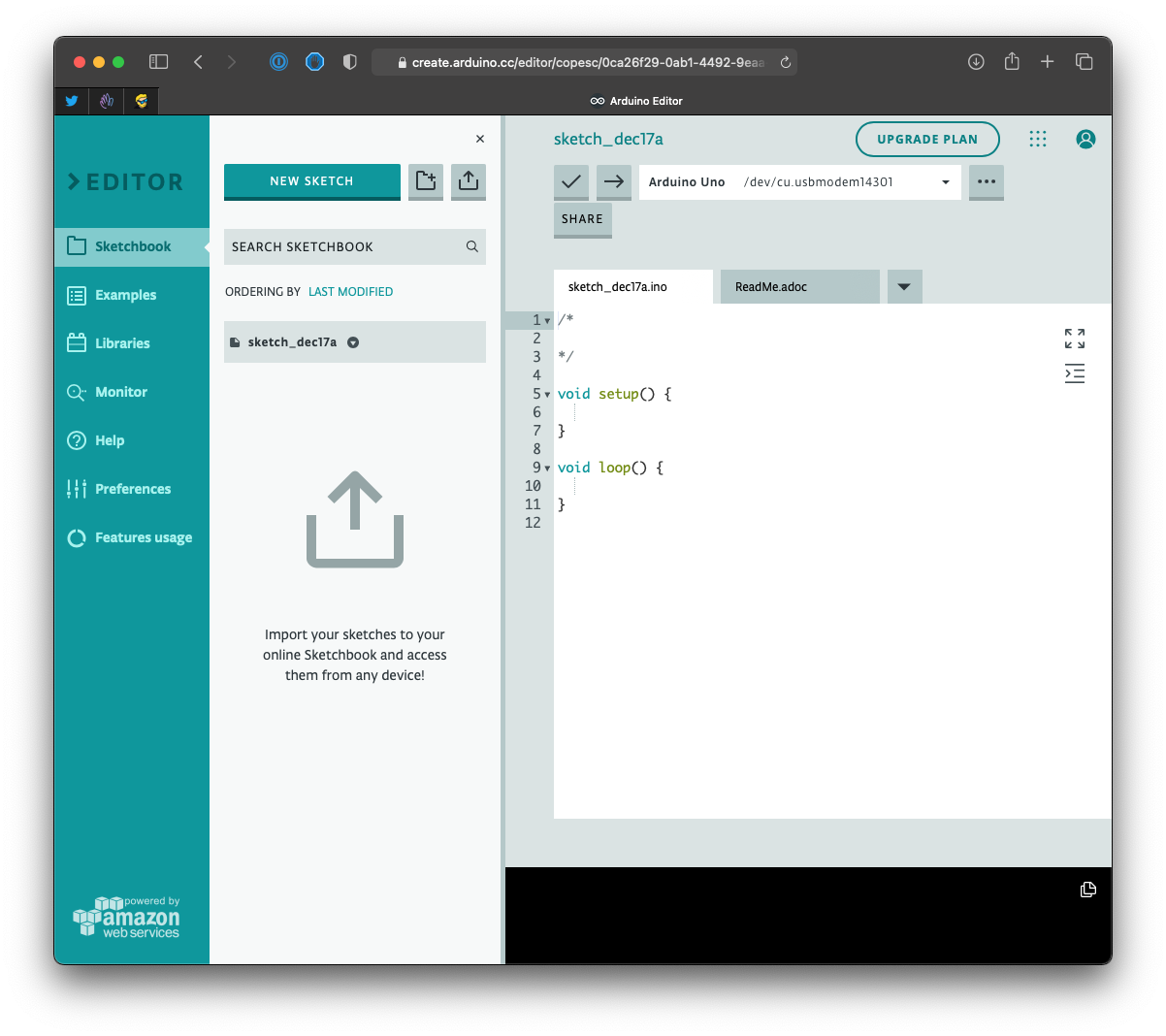 On top you can see it already recognized the Arduino Uno I connected to the USB port (the /dev/cu.usbmodem14301 line indicates the USB port). It automatically recognizes Arduino boards.

On the left you have a sidebar.

The Examples menu lists a lot of pre-made examples with source code, instructions and in some cases also schematics and pictures of the circuit: 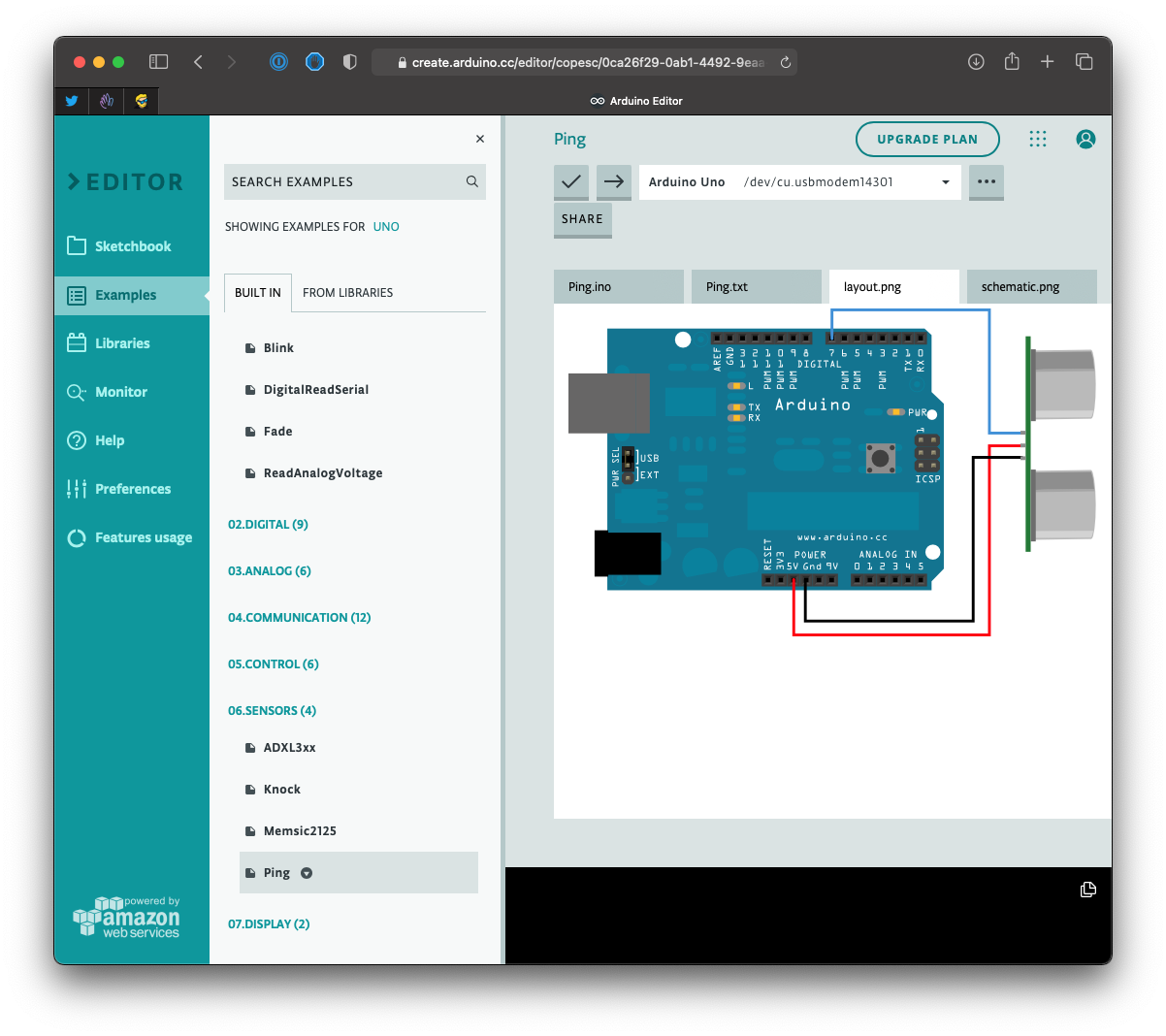 There’s a handy “From libraries” tab in this same Examples menu that lists examples that are provided by the Arduino libraries.

The Libraries menu lists the official Arduino libraries, plus tons of community contributed ones. 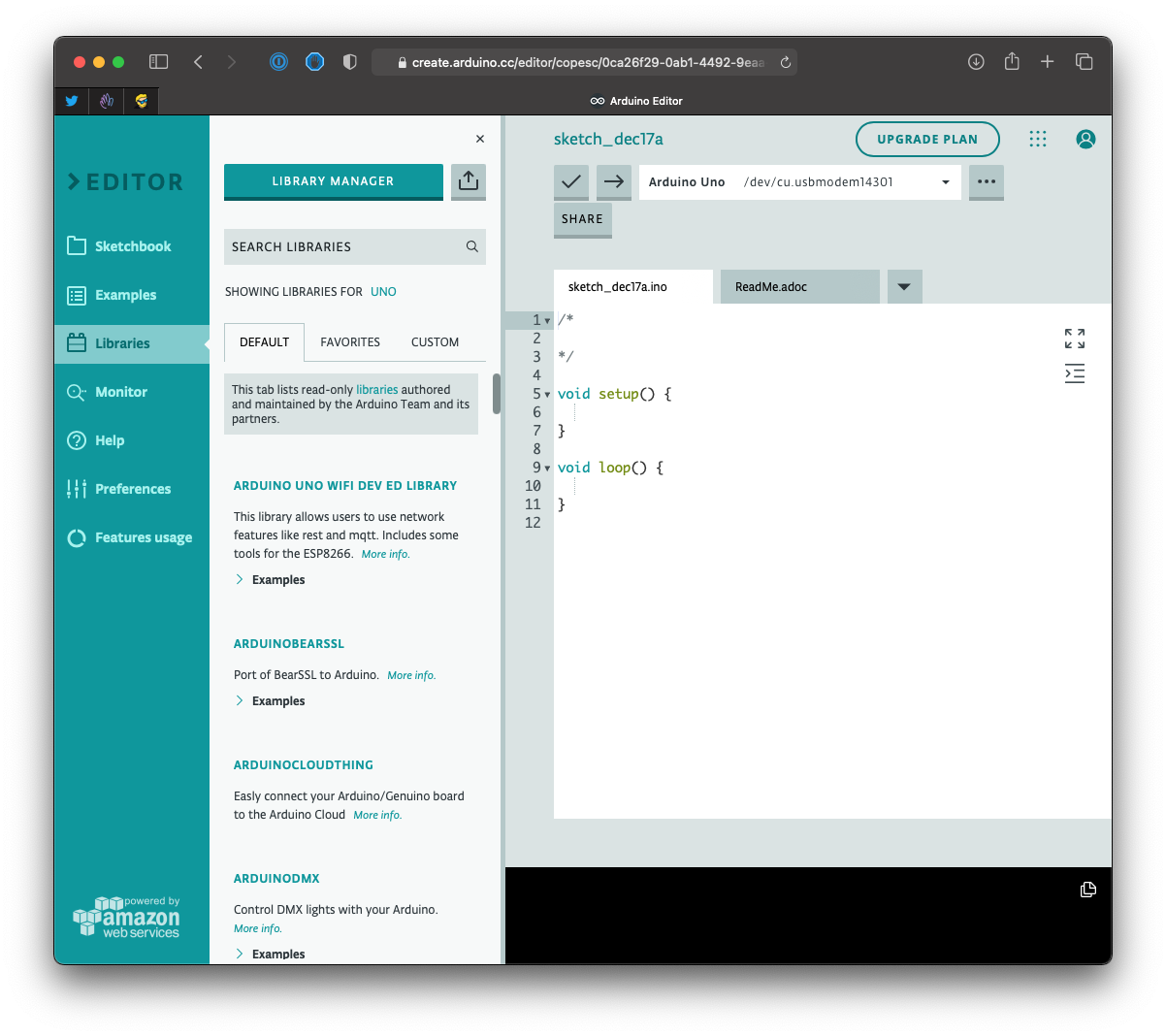 The nice thing is that you can mark libraries as favorites and find them very easily.

The fourth item in the sidebar is the serial monitor, a very handy tool to debug and get information from your Arduino programs (and send information to your board too): 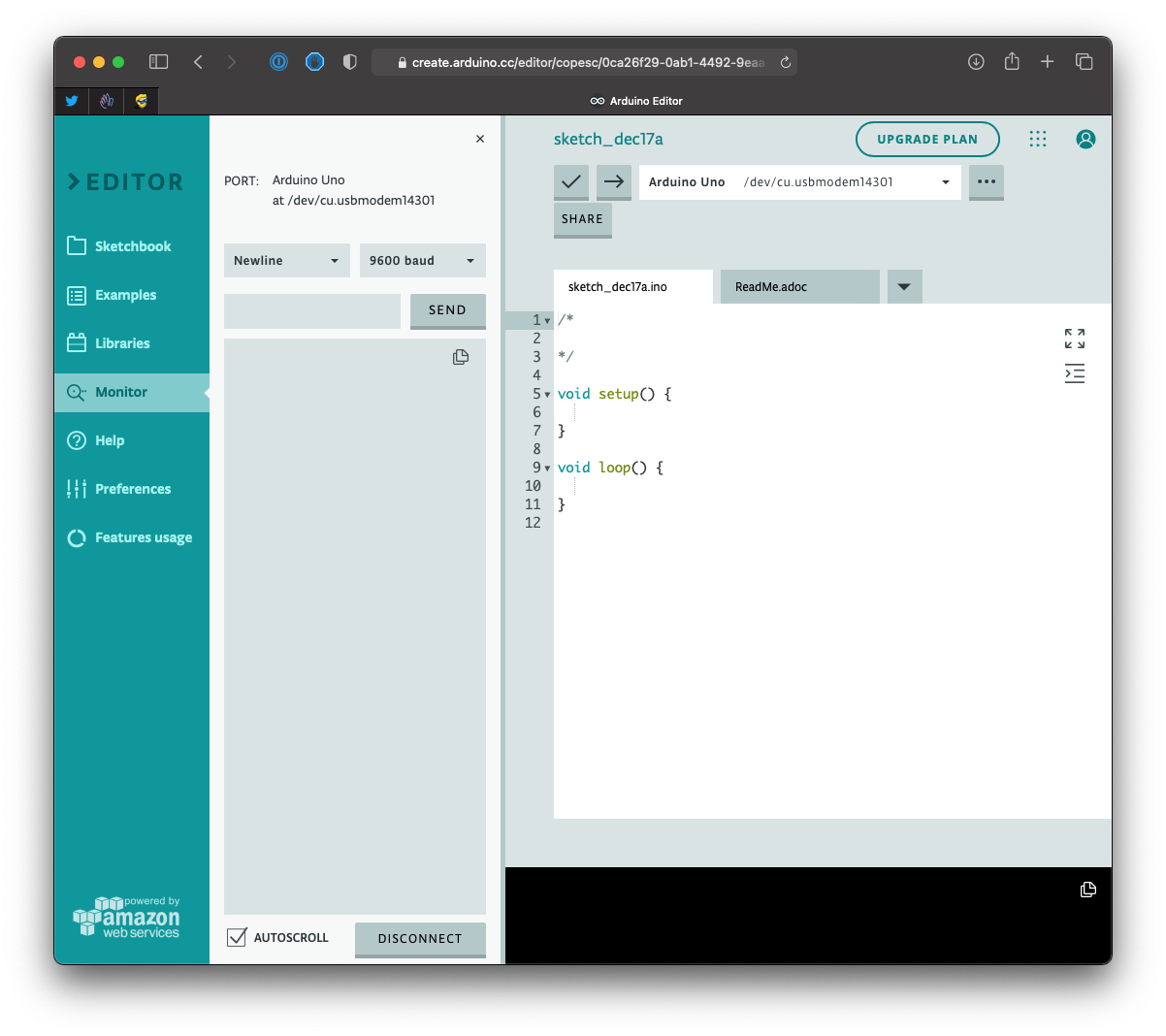 Next you have an inline help, which features some tutorials, the preferences and your usage quota of features like storage compilation time and the number of projects.

There is a limit of 100MB of storage, 100 sketches and 200s of compilation time per day, after that you can upgrade to a paid plan for $6.99/month which also includes advanced IoT features which I’ll talk about in another post.