There are a few different ways to run Python programs.

In particular, you have a distinction between using interactive prompts, where you type Python code and it’s immediately executed, and saving a Python program into a file, and executing that.

If you open your terminal and type python, you will see a screen like this:

This is the Python REPL (Read-Evaluate-Print-Loop)

Notice the >>> symbol, and the cursor after that. You can type any Python code here, and press the enter key to run it.

and then print its value, using print():

Note: in the REPL, you can also just type name, press the enter key and you’ll get the value back. But in a program, you are not going to see any output if you do so - you need to use print() instead.

Any line of Python you write here is going to be executed immediately.

You can access the same interactive prompt using the IDLE application that’s installed by Python automatically:

This might be more convenient for you because with the mouse you can move around and copy/paste more easily than with the terminal.

Those are the basics that come with Python by default. However I recommend to install IPython, probably the best command line REPL application you can find.

Make sure the pip binaries are in your path, then run ipython: 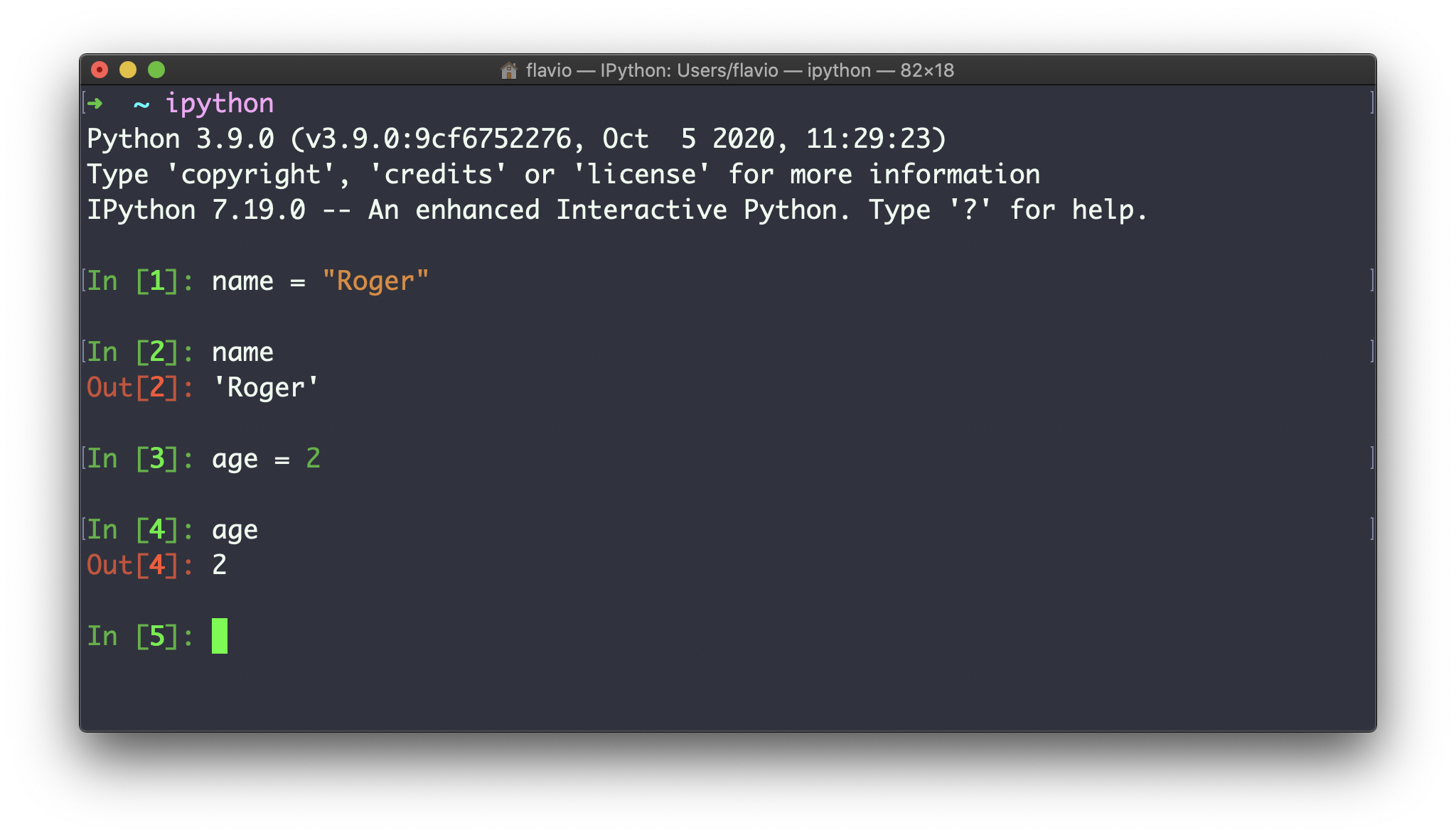 ipython is another interface to work with a Python REPL, and provides some nice features like syntax highlighting, code completion, and much more.

and then run it with python program.py

Note that we save Python programs with the .py extension, that’s a convention.

In this case the program is executed as a whole, not one line at a time. And that’s typically how we run programs.

We use the REPL for quick prototyping and for learning.

On Linux and macOS a Python program can also be transformed into a shell script, by prepending all its content with a special line that indicates which executable to use to run it.

Then I can set execution permission on the file:

and I can run the program with

This is especially useful when you write scripts that interact with the terminal.

We have many other ways to run Python programs.

One of them is using VS Code, and in particular the official Python extension from Microsoft: 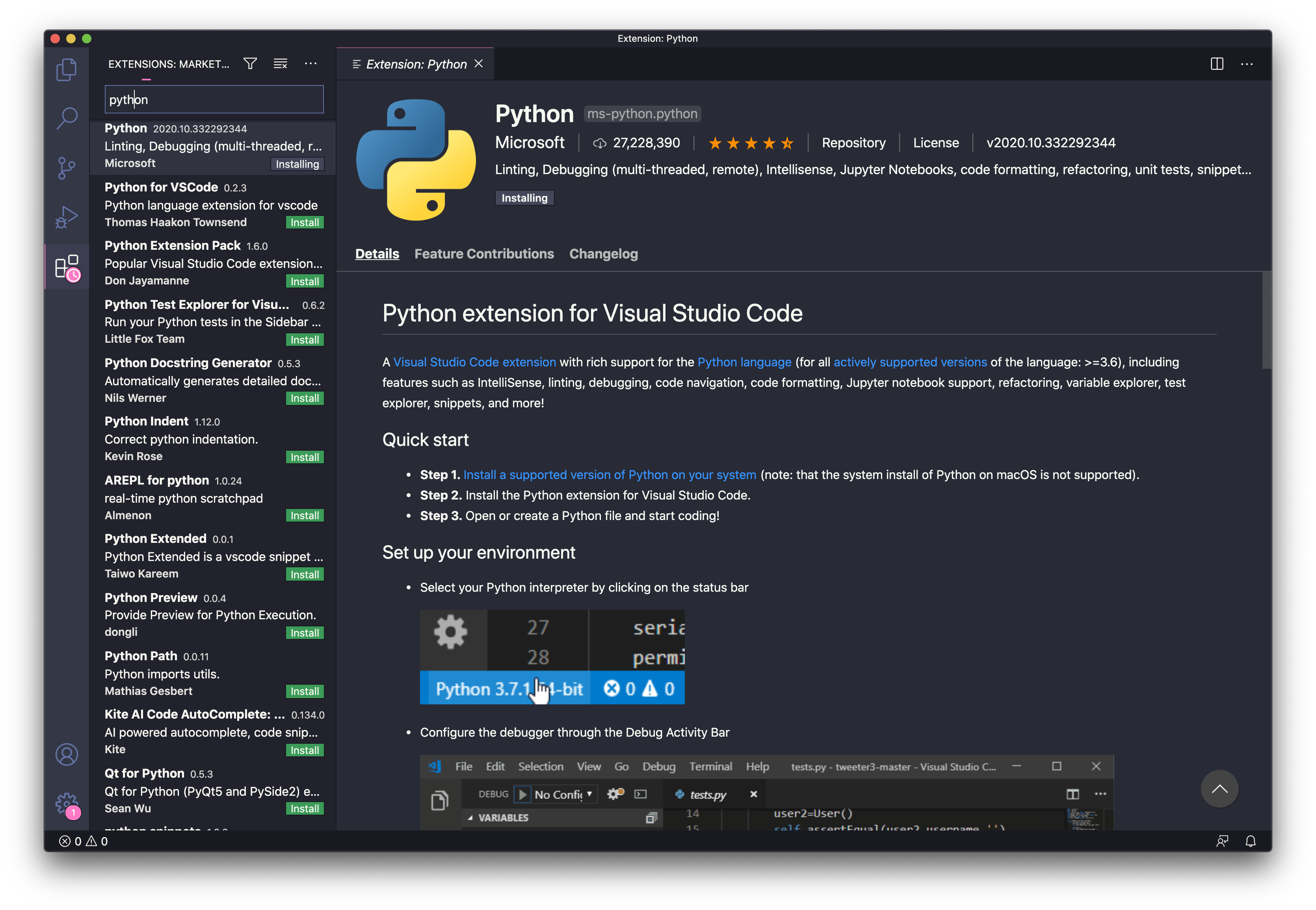 After installing this extension you will have Python code autocompletion and error checking, automatic formatting and code linting with pylint, and some special commands, including:

Python: Start REPL to run the REPL in the integrated terminal: 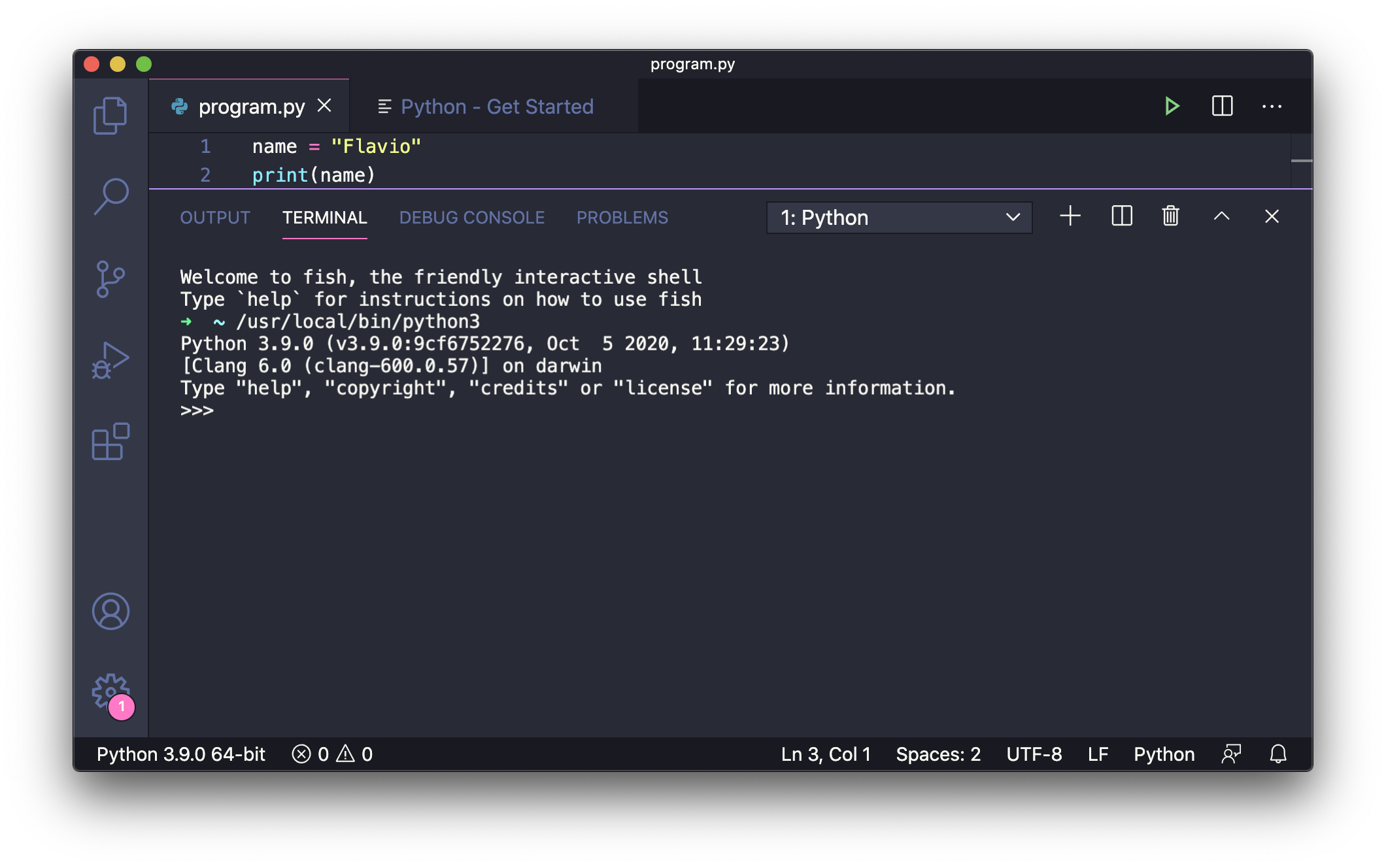 Python: Run Python File in Terminal to run the current file in the terminal: 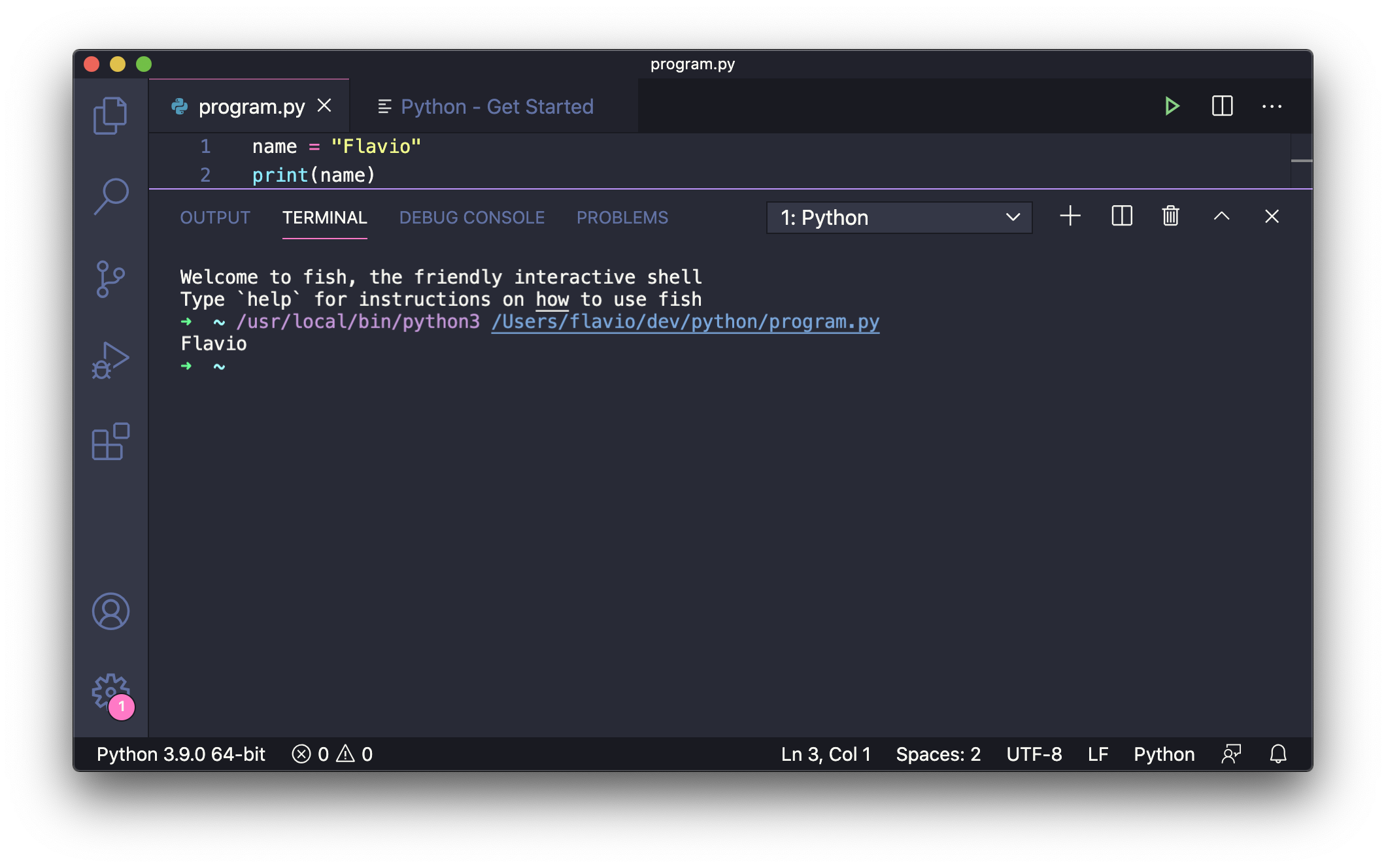 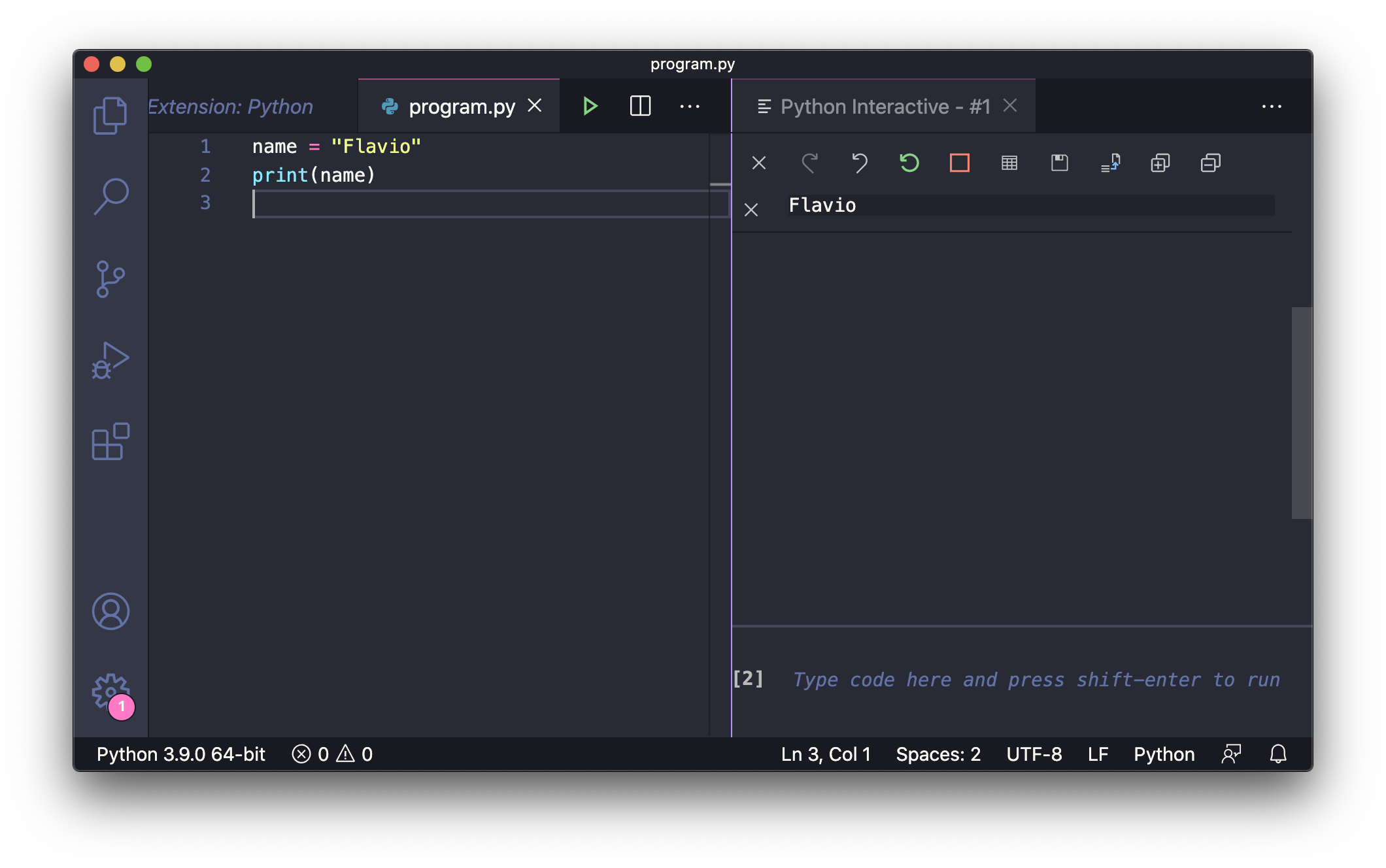 and many more. Just open the command palette (View -> Command Palette, or Cmd-Shift-P) and type python to see all the Python-related commands: 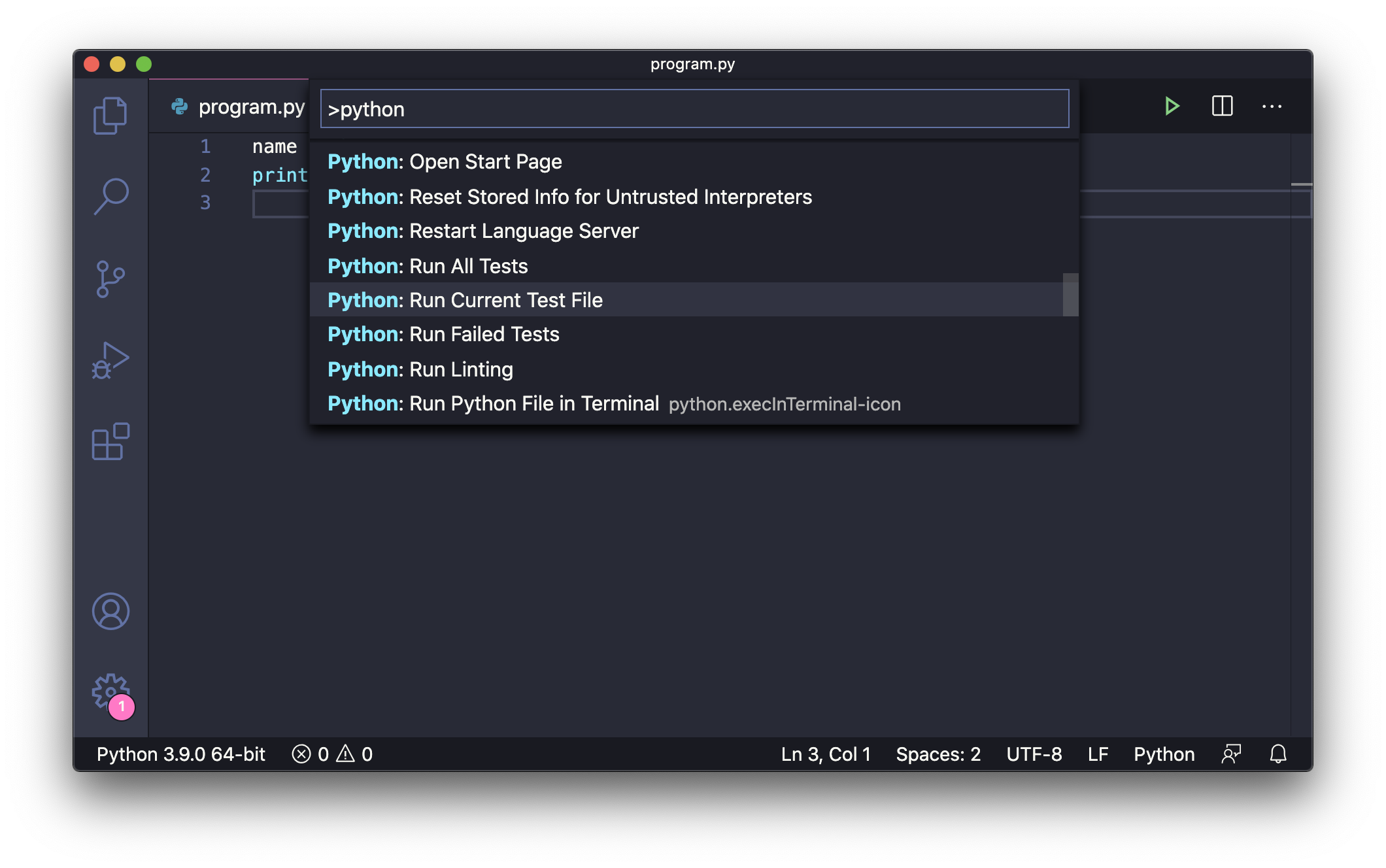