An introduction to Yarn

Yarn is a JavaScript Package Manager, a direct competitor of npm, and it’s one of the Facebook Open Source projects.

It’s compatible with npm packages, so it has the great advantage of being a drop-in replacement for npm.

When it launched it used to be way faster than npm due to parallel download and caching, but now npm did catch up with many of its features and is now the solution I recommend.

Tools eventually converge to a set of features that keeps them on the same level to stay relevant, so we’ll likely see those features in npm in the future - competition is nice for us users.

While you can install Yarn with npm (npm install -g yarn), it’s not recommended by the Yarn team.

System-specific installation methods are listed at https://yarnpkg.com/en/docs/install. On macOS for example you can use Homebrew and run

but every Operating System has its own package manager of choice that will make the process very smooth.

In the end, you’ll end up with the yarn command available in your shell:

Yarn writes its dependencies to a file named package.json, which sits in the root folder of your project, and stores the dependencies files into the node_modules folder, just like npm if you used it in the past.

starts an interactive prompt that helps you quick start a project: 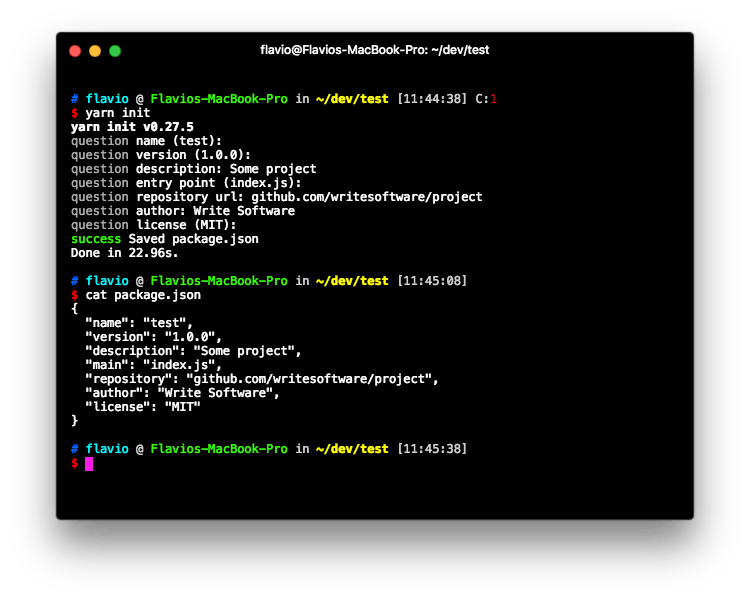 Install the dependencies of an existing project

If you already have a package.json file with the list of dependencies but the packages have not been installed yet, run

to start the installation process.

Installing a package into a project is done using

Install a package locally as a development dependency

Equivalent to the --save-dev flag in npm

When installing many dependencies, which in turn might have lots of dependencies, you install a number of packages, of which you don’t have any idea about the license they use.

Yarn provides a handy tool that prints the license of any dependency you have: 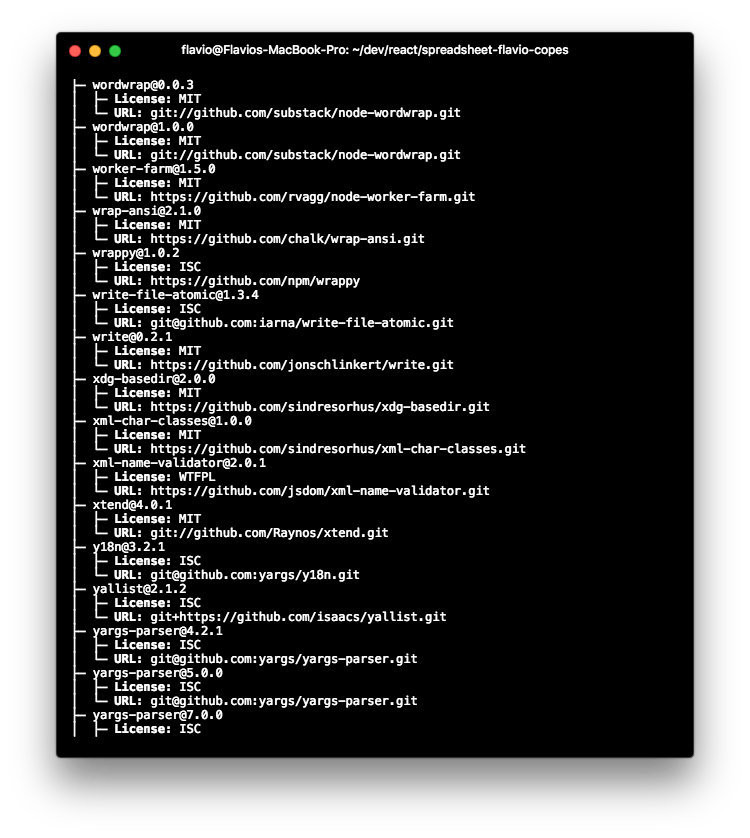 and it can also generate a disclaimer automatically including all the licenses of the projects you use: 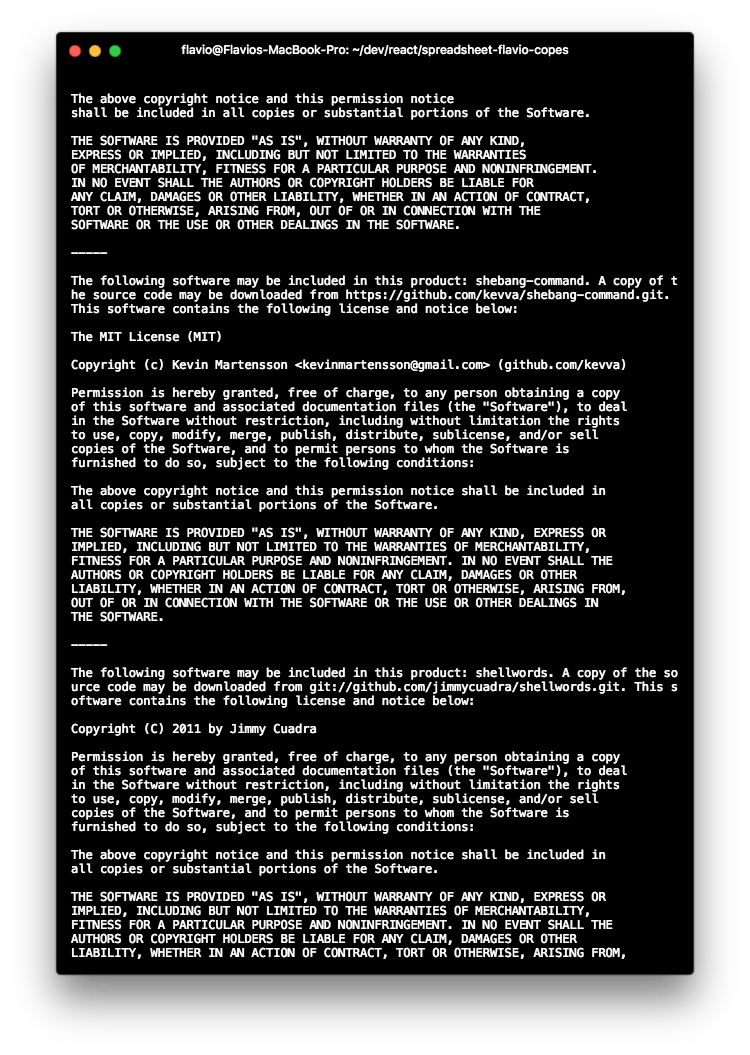 Do you ever check the node_modules folder and wonder why a specific package was installed? yarn why tells you: 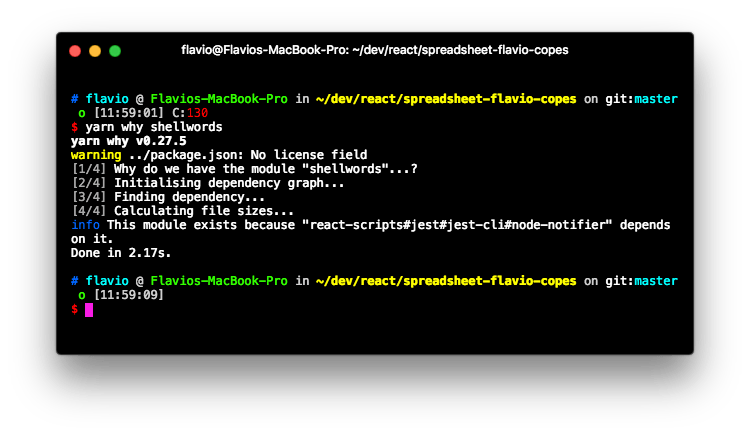 If you want to upgrade a single package, run

To upgrade all your packages, run

But this command can sometimes lead to problems, because you’re blindly upgrading all the dependencies without worrying about major version changes.

Yarn has a great tool to selectively update packages in your project, which is a huge help for this scenario: 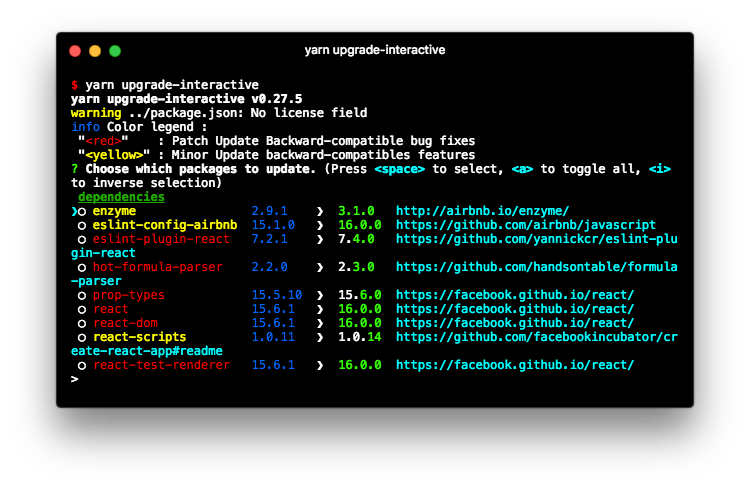 How to upgrade Yarn

At the time of writing there is no auto-update command.

If you used brew to install it, like suggested above, use:

If instead you installed using npm, use: